There are 22 Sri Lanka national parks. But with so much choice, it’s hard to know where to start searching for the perfect Sri Lanka safari tours. Sri Lanka wildlife consists of amazing elephants, bears, leopards and so much more.

Here’s a detailed look at the 4 most popular national parks in Sri Lanka for safaris. 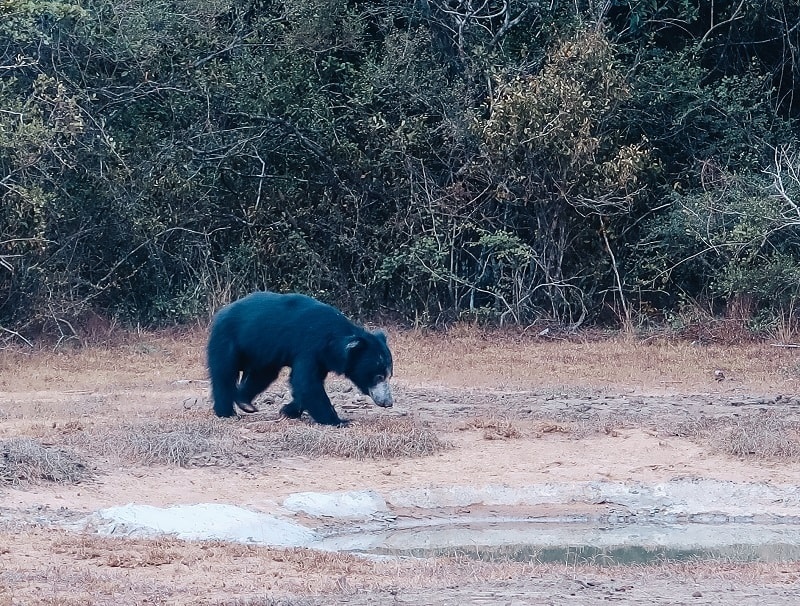 Yala national park is probably the most popular and well-known safari in all of Sri Lanka.

It’s the second largest national park in Sri Lanka and it’s a wonderful safari experience for all, especially families.

Yala safari is located around six hours from Colombo which is why most people organize a tour here (some of which I’ve listed below).

The only problem with Yala is that because it is so popular, you will be in a park filled with jeeps.

You may even see more jeeps than animals, and because of the high number of visitors, the chances of seeing leopards are slim due to the noise, etc.

But, you have a very high chance of seeing lots of elephants, so if you love elephants and don’t mind the crowds, then it’s a great choice!

This is probably the best elephant safari Sri Lanka has to offer.

If you're wondering when the best time to visit Yala national park is then be aware that Yala is closed during the drought season from the 1st of September to the 15th of October, but you can visit other national parks at this time, including Wilpattu.

Be aware that all my safari suggestions below include accommodation and safari for one night unless otherwise stated. I always find it’s best to get everything booked beforehand, plus it makes you excited! 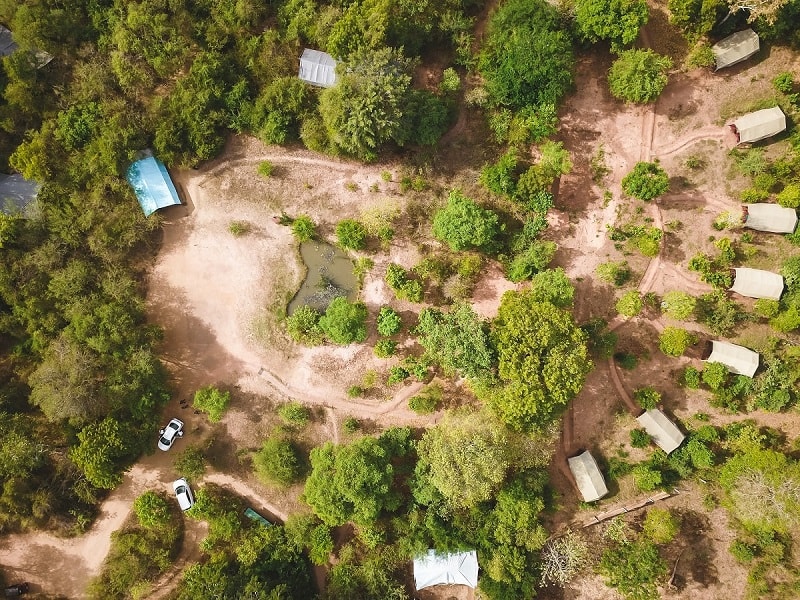 Safari Camp from above!

It was actually closed for 16 years during the Sri Lankan civil war but is now open to the public again.

Wilpattu national park is a perfect choice if you’re visiting the cultural hubs of Anuradhapura as it’s only 30 minutes away by tuk-tuk.

This is the park Bradley and I visited and it’s wonderful.

In my opinion, it's the best safari park in Sri Lanka.

It’s famous for its natural pools of water that exist, so you get a true essence of the “wild” here.

It’s the perfect safari in Sri Lanka for all seasons as both the wet and dry seasons bring different types of animals.

For example, the wet season is meant to bring greater sightings of sloth bears, but we got to see one in the dry season too!

Wilpattu national park is around 4 hours from Colombo.

Wilpattu is among the top national parks world-renowned for its leopard population, which is why Bradley and I visited.

The best time to visit Wilpattu is February to October, but you can visit all year round with certain eco groups.

Wilpattu is a quiet national park, probably because it was closed for so long, but that’s a good thing.

You will only come across 2 or 3 jeeps on your journey (if even that) and you will truly feel like you’ve got the whole park to you and the wildlife, which I think is what a true safari experience should be like.

So if you want a secluded Sri Lankan Safari experience, then this is the perfect one for you. 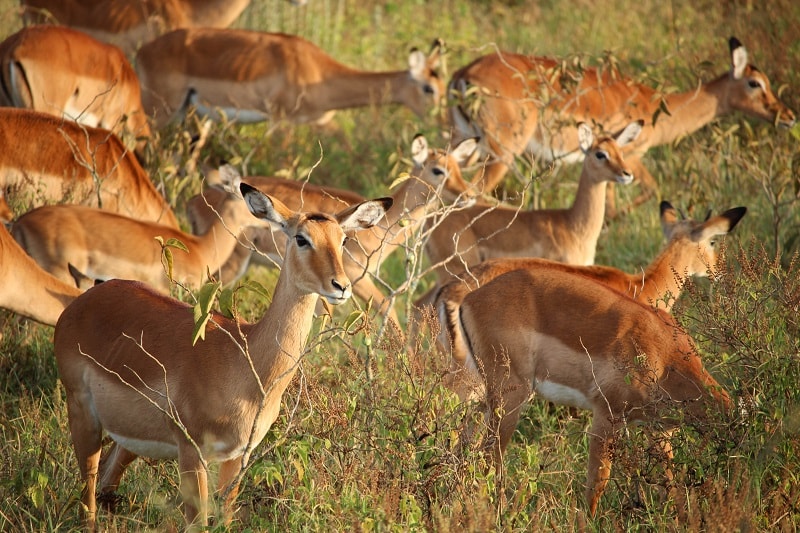 Udawalawe national park is located near South Sri Lanka and it is literally bursting with Sri Lankan elephants...more than 500, so it’s an elephant lover's dream.

You’re almost guaranteed to spot them with those numbers.

Udawalawe national park safari is located 4 hours from Colombo and is the 3rd most popular Sri Lankan safari.

Within the park, there is even a Udawalawe Elephant Transit Home that was established in 1995 for the purpose of looking after abandoned elephant calves within the park. Cute right?

The best time to visit a Udawalawe safari in Sri Lanka is all year.

It’s an all-year park due to its location, which makes it a perfect spot for any Sri Lankan itinerary.

This is a perfect choice for those who want to get awesome pictures of elephants and baby elephants.

It’s a fairly popular park, but won’t have the same crowds as Yala, so it’s a good choice for those looking for something in between Wilpattu and Yala, and since it’s good for spotting animals all year round, there are no seasonal restrictions on when you visit. 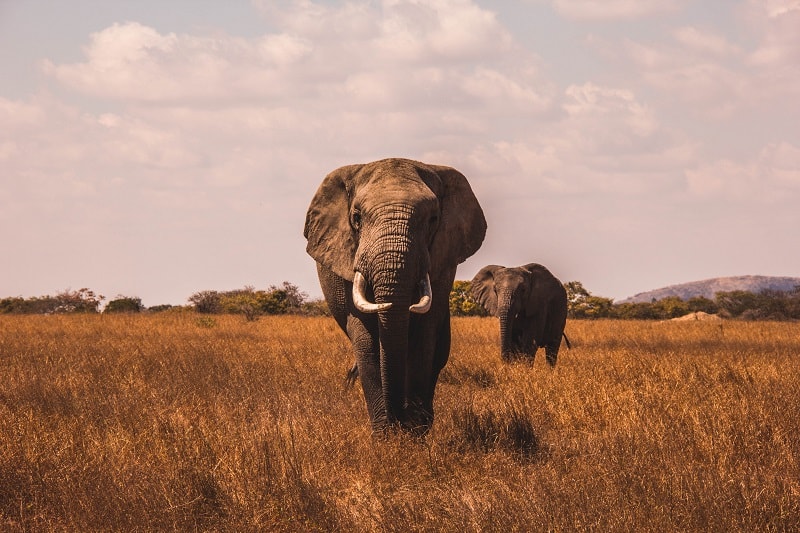 Minneriya national park is located in the dry zone of Sri Lanka, and it’s a perfect choice if you’re visiting Sigiriya, (which you should).

It’s one of the most important bird areas in Sri Lanka. It has an interesting elephant story…

According to the wardens, one elephant lost her baby due when pregnant due to being hit by a jeep, so as revenge, she rammed into over 15 tourists since then.

I guess elephants remember, and you should be careful not to kill their children!!!!

But yeah, so the elephants are known to be a little angry at humans, which I think is fair enough.

It’s an important spot for monkeys!

Fun fact, this national park safari has over 25 species of butterflies!

People tend to take a Minneriya national park safari for the chance of seeing elephants and monkeys.

So if you’re a fan of both, then this is a good spot.

A good time to take a Minneriya national park safari is July to September as that’s when the elephants flock there.